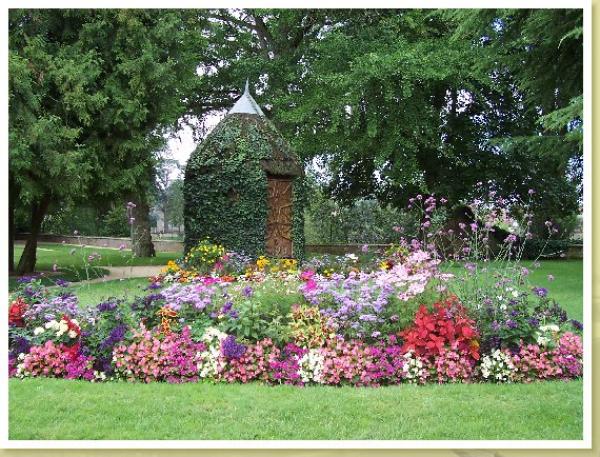 On a surface of approximately 5000 m², The public garden "Rene Boylesve" is located in the old enclosure of a strengthened castle built about 987 by Foulques Nerra or his descendants, one of the ten castles first built in Touraine before the year 1000. The seigniorial room of which you can still discover some remains at the centre of the public garden was probably equipped with a quadrilateral keep.

It became property of the commune after the second world war, the public garden was the object of successive development and you can find today a medieval garden and a rosery established in the old ditches.

The foundations consist of petrols of rare or exotic trees (sequoia, ginkgo, khaki) whose plantation dates from the 19th century. A very varied vegetable garden awaits the visitors if you take a pleasant stroll by the river. Descriptive particular a "Cartesian" the permet the development of the cultural heritage and plant.

While strolling, you will find the statues of the famous characters of the city: Rene Boylesve, writer, member of the French Academy, Rene de Buxeuil composer born in Buxeuil in 1881, and of course René Descartes born in 1596.

The mini-farm was arranged in the public garden, in which various species cohabit: two spangled, a mule, a couple of Ushant sheep, dwarf goats, as well as low court: hens, cocks, peacocks, pheasants, and ducks.