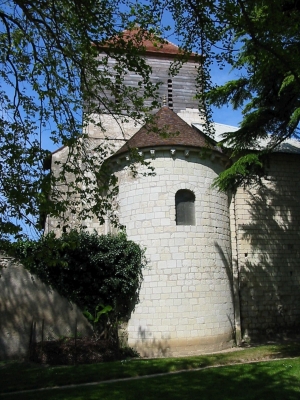 The village of La Haye had two parishes : Notre Dame and Saint Georges.

The Notre Dame church was built in 1104 in the strengthened enclosure of the town of La Haye , on the edges of La Creuse, and is dedicated to the Virgin Mary. She was in the vault of a church which has now disappeared, "The monastery of Sainte Marie of La Haye". She played an integral part to the strengthening of the site set up by the count of Anjou Foulques Nerra. Then the vault became the Notre Dame church. From 1576 it will be reserved for the Protestant worship.

Closed down during the Revolution, it was sold like national goods, and was transformed into a barn.

This remarkable Romance church is currently in a bad condition. However, a few years of restoration work have been undertaken.

Inside, superb mural frescos, from the 12th to 15th centuries, decorated the chior. There still remain fragments which have just been restored.

It is known that the mother of Descartes and her last born were buried there in 1597.

The church is closed due to restoration, but a little may be visited by group and only by appointement.

Before the revolution, the village of La Haye consisted of two parishes, Saint Georges and Notre Dame.

The Saint-Georges Church is the oldest church of Descartes. It was built at the 12th century and belonged to the abbey of Preuilly.

This building is of Romantic style with a certain influence from the Gothic. It saw many transformations with 15th, 18th and 19th centuries.

It is in this church that René Descartes was baptized on April 3rd, 1596. The church is opened with the public every day of 9:00 to 19:00. It is located on la rue des Champs Marteaux.

The Saint-Pierre Church is undoubtedly most beautiful of the three churches of Descartes.

Its equal proportions and its Romantic style are remarkable. It dates from 11th and 12th centuries, a porch was added to the 18th century. Built on the plan of a Latin cross, the cross of the transept is surmounted by a square bell-tower rising to the level of the belfry, on each face, of the double bays whose curves fall down on posts.

The apse of the church, lit by three windows in semicircular arch, is decorated beautiful stained glasses.

It is located district of Balesmes, in the Square Bérégovoy.